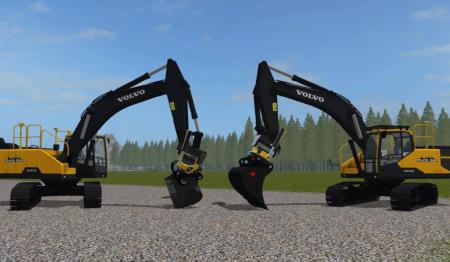 Because we are now also on construction and mining. Here is the Northstar Landclearing adjustment with the volvo ec 300 excavator. Now it has a rotortilt that is built into the excavator, which means you can use it with joysticks without the choice of a switching tool. This is not engcon rotortilt, but it does quite well. New cells and attachments will be released soon!

Changes made and notes:
– added Rotortilt
– Possibility to mount the cab guard
– Quick coupling
– The controls are the same as the loaders
– Output control moves rotortilt hydrorualics side to side