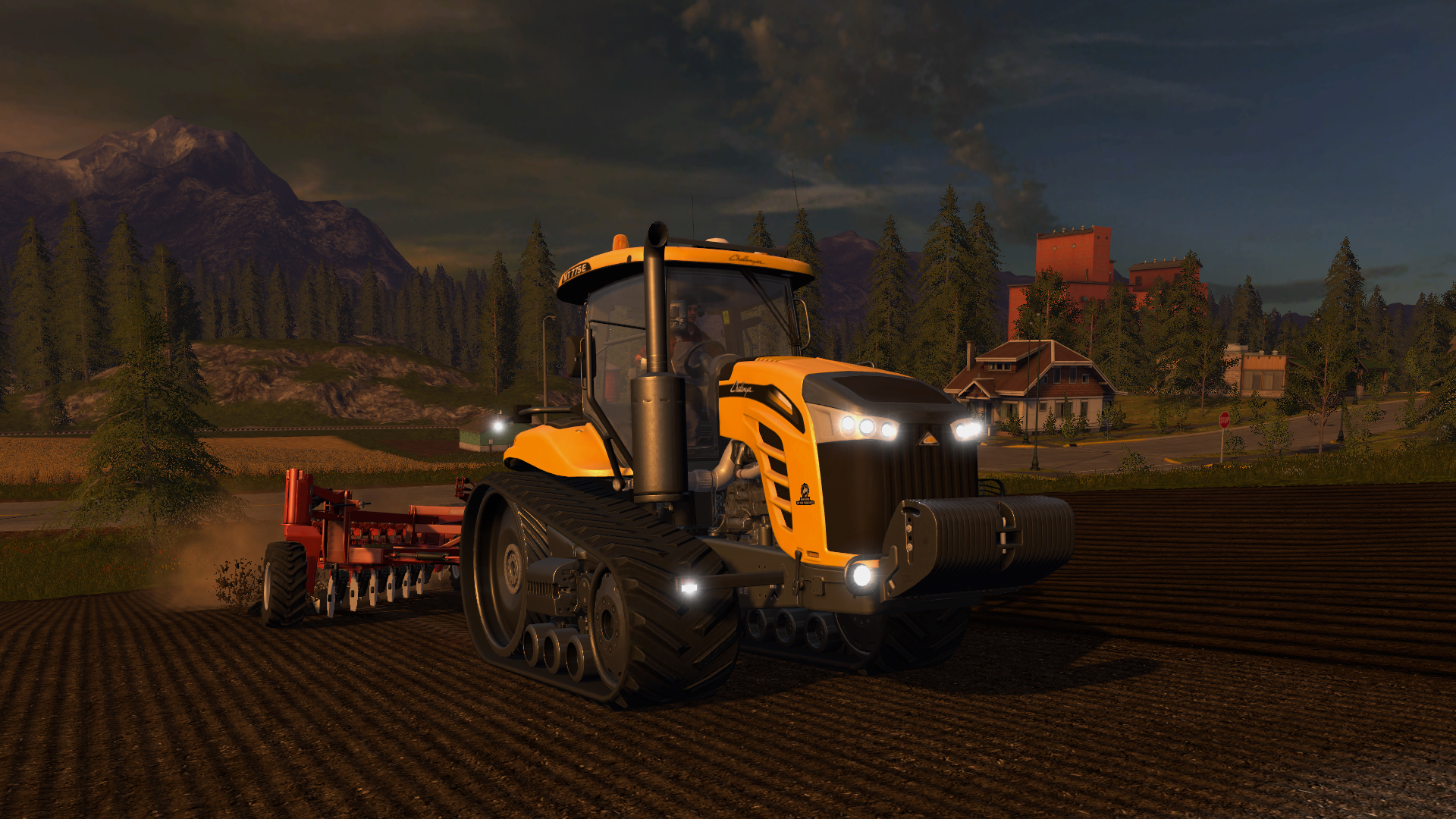 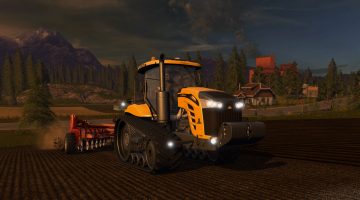 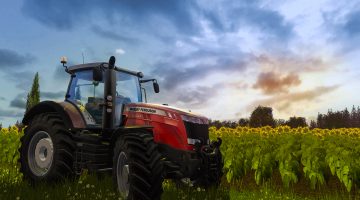 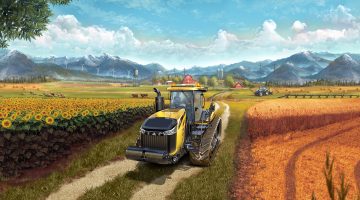 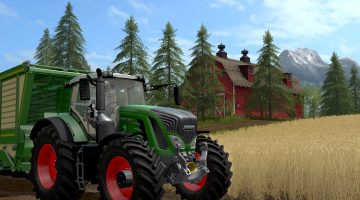 Steam just added FS17 to the store for Pre-Order. Also noting that we’ll get two extra tractors from them, Valtra T Cow Edition and a Challenger MT700E Field Viper. This also comes with some new images from in-game by the looks.

What fans think about this amazing Farming Simulator 2017 game?

Looks like the map may be located along the Rocky Mountains region, now is it on the Canadian or American side? I’d love to see Canadian, although not much difference between the two, we’ve already had an American map so why not move a little further north?

Wow new screens look just like FS 15! Congrats Giants for only taking 2 years to pull this off.

I know this is harsh to say but man every release is like groundhog day.. looks to me like the textures are pretty close to all the same as FS15 I bet we get something like real terrain mod to make tires bounce on the suspension system tractors do not have.

I think Farming Simulator is becoming a less of a game and more of a showcase of machinery so manufacturers can sponsor themself although the GIANTS are the one who are paying the licences.

If they are really from FS17, then we can get disappointed, but if this just a showcase of new models, then there is still hope that actual game will be better.

The screens look like FS15 ! I’m not surprised ! looks like the same old story where we get a game with some new machinery and re-buy the stuff from previous games and DLC’s .

The fendt doesn’t look ingame but the Challenger one does. Not very promising if I’m honest.

In the screens it seems like they have made many small improvements. Overall it looks sharper and more realistic .
If you take a good look you can see that for example the windows look better, the bodywork looks more realistic and the models look more detailed.
But there is to little to see to draw any good conclusions.

The photos don’t look to bad in my opinion, in the photo with the fendt 939 I think its pulling the new krone TX tri axle trailer. The textures in the photo with the challenger look quite similar to FS 15 with a slight difference with the ploughing textures, where do the crop textures. Like Robert997 stated the tractors do look much better with the windows and I also noticed in the challenger there was a screen in the front left so hopefully this will be interactive. overall things are on the up!

I think the screenshots resemble what I expected. By no means was it necessary to have an extreme graphical change because FS15 graphics really aren’t that bad when you look at the Gold DLC. The lighting actually seems to be better in the pictures as well although night time is the better way to tell of any improvements.

If anything the detail on the tractors is, as usual, unmatched and that still makes all the difference. Yes it may not look identical to real life but you can always edit the colours on a screenshot, you certainly can’t make the model that realistic though.

Trees also look better with the new textures and I can already happily say I will be using them on any of my 2017 maps.

As for the map, we haven’t seen enough to get any idea of the quality. The buildings have the same level of detail as Sosnovka but I never get many hopes up for me liking the base map because I haven’t for a while.

We still need a trailer to get any impressions of the gameplay so there’s not much point moaning about no dynamic terrain when we don’t know what else they might have worked on instead.

Ohh dear the game dosent look anything like the CGI trailer just like everybody has been warning us and only looks slightly better than the previous version… What have you been doing Giants!!!

I mean its not like your team which isn’t overly massive has had little time in the past year and a half to develop a completely new game engine to make our graphics look massively different. It’s not like in between all this they have pm released a new mobile version, a number of dlcs and updates for the 2015 game, released the 2015 game on consoles, signed up a number of new brands for the next fs as well as… Remodel all 200+ machines, as well as add new models, add new crops, add new animals, lots of research to understand agriculture production better giving the fact that most of giants team are not active farmers, add countless new features such as rental and improved workers… And all while remembering you all have families to go home to and a life away from developing Fs.

I mean come on guys?! Why are you getting so up in arms over graphics not looking so beatiful? Name any other game franchise that has massive graphic changes between titles. Even gta when you look at liberty city, vice city and San an dries doesn’t have massive graphic changes between them. I feel the game is more about the features in it to me over how pretty it looks… But I guess there will always be complaining.

On another note I do like the look of that pre order viper challenger, and it appears Giants will be going for the new shade of fendt green on the tractors in game over the older forest green shade.

Hadn’t you heard that if we moaned twice as hard as last time then GIANTS were offering to go into meltdown, rip up their contract with Focus and Nvidia, sell all their disc warehouse space to Cattle and Crops and go to live on the streets with their families Cheesy?

To be honest I do wonder what GIANTS representatives on this forum think of our blatantly unnecessary negativity and lack of respect. Without them, not only would the audience for this specific genre of game be much smaller, this forum wouldn’t exist for people to moan on.

At the end of the day, like Jgregg624 says, they are just ordinary people creating what would probably be classed as an Indie Game on consoles to satisfy a niche audience. If anyone here is disappointed in what they see then only they have the power to what they want to make it be. Maybe when they get a degree in computer programming and design then there might be an ounce more of appreciation for the undoubted effort it takes to make a game like this, with a limited team, be of a high quality and actually run well. No, it isn’t a ‘simulator’ as people expect but that’s because GIANTS can’t deliver a tractor to your door and give you land to work.

I personally think that what little we’ve been shown so far is reasonable enough to keep me interested and pre-order it, as well as ignore the copy and paste of the FS15 discussion that this is.

Well I have just pre ordered mine.. Not bothered about screen shots or CGI. FS15 was better than FS13 so I think FS17 will be better than FS15. Smile people its only a game..

The same game! wow just played all mine from 09 to 15 and they are along way from the same game. I wonder if these guys play other games, played 14 to 16 fifa and they are pretty much the same, a few minor tweaks on them, the only massive thing different about the game is the teams in the leagues and where the players are playing.

All games are the same, and I think that in the short space of time, giants have changed their game quite abit, just go back and look for yourself. And finally only another ten years and cattle and crops will have a game on the market and another fifteen and it will be playable.

However while o can see its resembling fs 15, this looks nothing like fs 2013 or 2011, so there must be improvements in there somewhere? Or does this look exactly the same as the 09 game to everyone.

I think that no matter how many years into the future Giants stays in the game making business, and no matter how many future versions there are of FS, there will always be the same whining and complaining, then the very same folks will buy the game, complain some more, then love it… lol Happens the same way every game release.

I think nealmac expressed it well: “speculation”. Clearly there are higher expectations than what FS17 will deliver, leading to whining and complaining.

I am sure FS17 will in many ways be better than FS15. Better graphics, more brands, etc. Once the script documentation for FS15 was released there came many new mods and scripts which now enhance gameplay beyond FS13. Not to mention the quality of the maps (thanks to all the excellent map makers on this site!). So no doubt that the game has evolved and I am sure I’ll buy FS17 and dlc’s when I feel the time is right. If it is one area where I am preparing myself to be disappointed it is physics. I just wish Giants could accomplish what dural did with MR, but I realise it is far fetched.

Please leave your opinion about Farming Simulator 2017 in comment bellow!