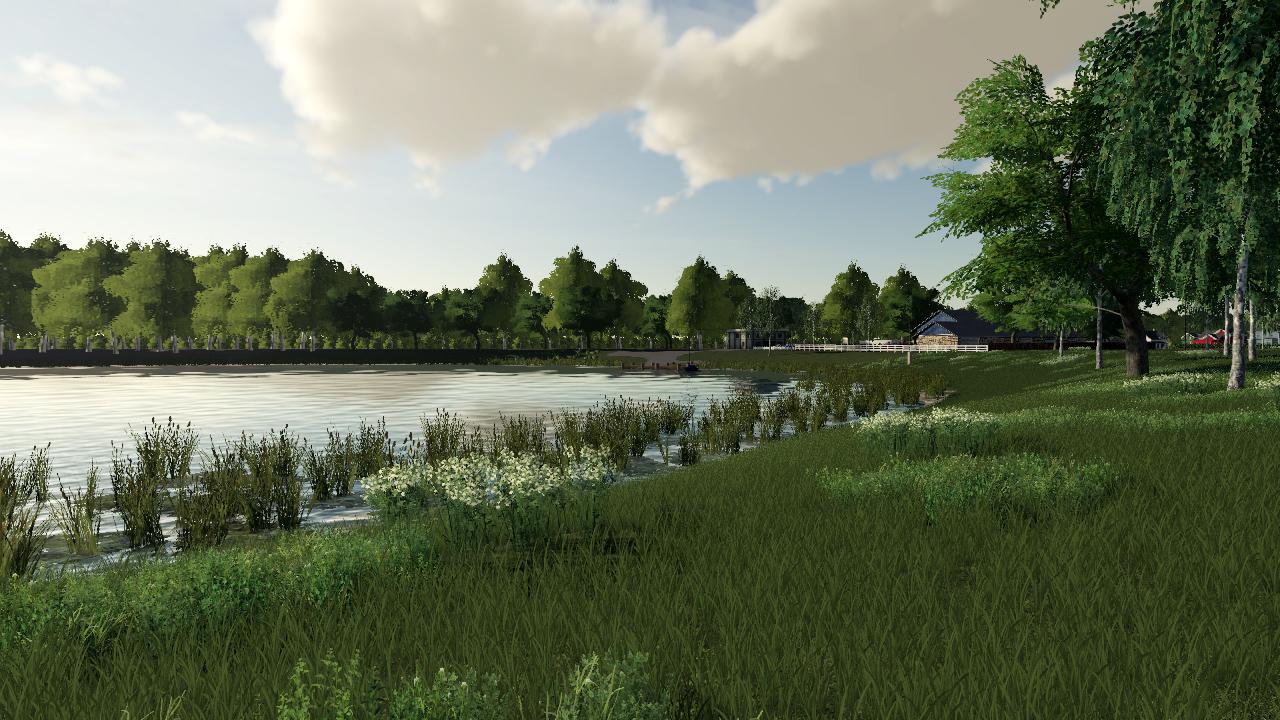 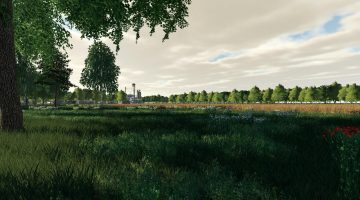 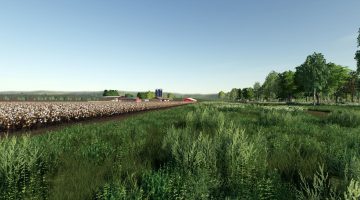 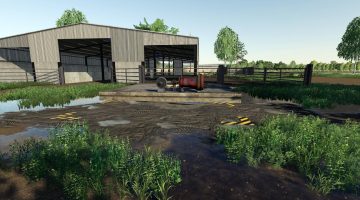 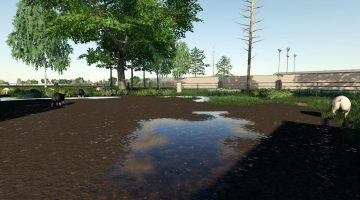 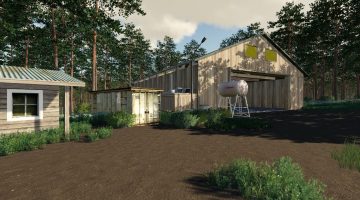 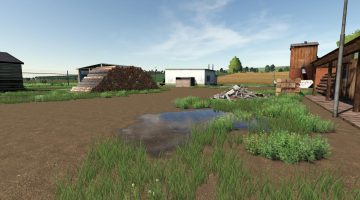 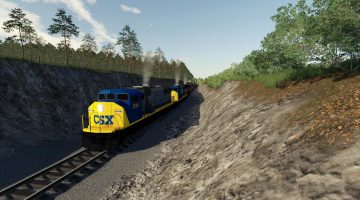 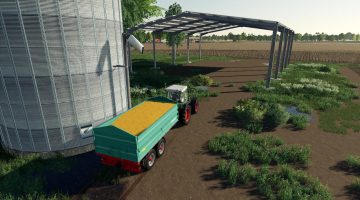 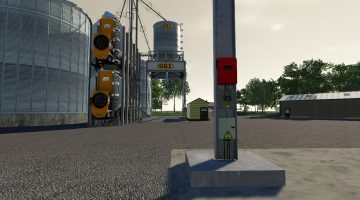 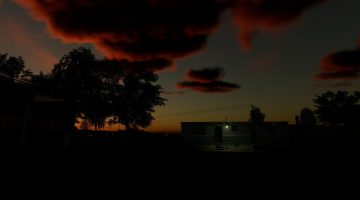 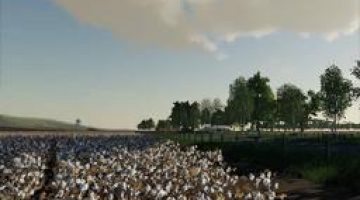 The very popular Emerald Coast USA map, enjoyed by many in FS 2017, is now here in FS 2019…
NEW in this version, 3.0, is the dynamic mud introduced to FS 2019 in Nebraska Lands USA…
Some mud will be active at all times, other mud will respond to ground moisture, so when it
is raining, and for a bit afterwards, that mud will be active.  With Seasons, the mod will
really come to life, with variable mud.  This map is equipped with full Seasons compatibility
a seasonsmask has been added and all placeables have been edited to work with Seasons as well
Most foliage layers will not change colors according to the season however, as in this area
in real life it is green all year long with only a few trees changing colors and it never
snows although it does get cold in the deepest winter days. So, the lake freezes over if the
ground temps are below freezing, and folks will have to light their fireplaces…
Also, in this version, the individual GSI bin and the individual Brock bin use the new script
from GtX to allow any grain crop to be stored in the bin, unlike before, when only one grain
type was allowed.  Due to the new script, ONLY one grain may be stored at a time, to switch to
a different grain, all of the first grain must be removed first, as in real life.  Standing in
front of the output auger will cause info to appear in the F1 menu, showing the graintype that
is currently in the bin, as well as the amount of that grain and the percentage full.  Also in
this version, the root store silos have been rebuilt to incorporate GtX’s script so they now
have movable planes that change according to the crop stored, and can hold only one root crop
at a time.
This map embraces the many new features of the 2019 game, much of the land is buyable, including
all the field areas and the huge forest area… as well as several wooded lots around the map,
even a couple of overgrown lots in town in the residential district. There are transport missions,
hauling pallets of stuff from one place to another, also field missions on most of the fields.
You, the farmer, have been away from the Emerald Coast for a few years… in the meantime, a
severe storm ravaged the area, many buildings were destroyed, much was damaged… all of your
equipment was lost, farm houses destroyed. Insurance finally paid out and the area has rebuilt.
You are back, ready to make your presence known as a master farmer once again… can you do it?

Welcome to Emerald Coast USA…
Deep in the southeastern United States lies the Emerald Coast. Just a few miles north, however,
there is rich farmland. Now you can journey to this area and enjoy the farming experience for
yourself. You begin with adequate equipment, but to work well you must become profitable and expand.
In this region forestry is just as big a business as arable farming. Therefore, a large managed
forest dominates the northwestern hills of this map. Arable farmland can be found in between the
forest and the town, which is located in the southern part of the map. All standard animals are
available, with a sell point in town.
All of your farming supplies, such as fertilizer and seeds, must be bought in town. (no seed or
fertilizer triggers at the farms) Fuel storage is available on the farms, with a small amount to
get you started, for more, use the universal pack fuel trailer to refill from town. For those that
prefer to fertilize using anhydrous ammonia there is a dedicated sell point by the main highway.
There is plenty of work here, so enjoy farming in the Emerald Coast, USA!

• In “New Farmer” mode you start with some equipment, some money and the best wishes of the folks
in the community.  If you start in the hard modes, you get nothing but some money… work wisely…
• Get water at the lake for free / Farmland Fertilizer sellpoint has bulk fertilizer, seeds, lime
and herbicide available… in addition to water.  Fuel is available at the Shell station and at
Marty’s Diner… Over at the Farm Land garden center, you can purchase premixed pigfood… The
animal dealer always has more manure and slurry than they would like, you can get either there
very cheap…
• There is custom traffic on this map, edited for faster speed without tinkering with the game itself
and messing up other maps… definitely do not pull out in front of them! The traffic will now stop
at the intersection, and, make random choices as to which way to turn.  Also, several vehicles are
parked at various locations (during the work day) and leave at night.
• The dealer lot and lobby, the granary sellpoint, the fertilizer sellpoint and the garden center, the
sawmill, the dairy and the rootcrop sellpoint all have timed gates which open at either 7:00 AM or
8:00AM and close at 6:00 PM… no entry is permitted into these areas before or after hours…
• The Harvestor silos function again as fermenting silos, using the great script by Farmer_Schubi…
Ensure to have the included HarvestorSilo mod in the folder and active when first starting your
gameplay… the silos take both grass and chaff and will slowly convert both to silage.
• The bunker silos are modified to produce compost rather than silage, the fermenting time and
compacting processes are the same… The land must be purchased before using them.  They take
precompost, which is produced at the Razwood Factory in town, which accepts manure, straw and
sugarbeet to make the precompost for the bunkers.

There are four sellpoints to sell stuff:
• Deep South grain mill – wheat / barley / canola / corn / sunflower / soybean / oat
• Garden Center – wool / silage / compost
• Biomass Plant – woodchips (located at the sawmill)
• Southern Ag – sugarBeet / potato / sugarcane
Also, there is a cotton bale drop off point in the business area, to sell your bales… Regular bales
and straw may be sold at the animal dealer, around back…
To use this map, unzip the EC_UNZIPME file and place all of the included files into your mod folder and
remember to activate them for proper functioning of the map…

Disclaimer: this is a highly detailed map, using many different scenery objects and several custom
textures to acheive visual realism, and as such will require a strong, high spec PC to run… especially
if you have many mods on the farm. The only solution to this issue is to not use any mods and/or turn the
settings down.  Additionally, to avoid unforseen issues and conflicts, please have ONLY this map in the
mod folder as having multiple maps in the folder will cause issues as the game loads all the scripts from
all the maps, including the active one…
IMPORTANT: As this map has a built-in GEO to simulate the conditions here, in the Emerald Coast, there
is NO NEED to use a custom GEO… in fact, issues can and may result from doing this.

This will be the final version of this map, so, any things you don’t like or would like to be improved
will have to be for your own private editions.  It is absolutely NOT allowed to edit and upload ANYWHERE
without my express permission…